I suppose if you want to get really picky about putting blame on an object rather than the person, then you'd be the same person who thinks "SUV hits pedestrian...news at 7" is acceptable.

But kids don't come with instruction manuals, we know this.  What worked for the 1st  child doesn't necessarily work for number 2 or three.  What works for your best friends kids might not work for you, and the woman who has "angels" for children and tries to give you advice on your children can suck an egg.  You know your kids better than anyone.  You'd think I know my kids as well, too.

We are having disciplining disagreements.  When to scold, when to discuss, when to redirect, and when to remove to time-out.  Then, once a time-out is enacted, what and where will this take place?  Their room? A specific chair? A specific place? How long?

You have answers to these questions, I know you do.

This week we moved the fish tank from his room to the living room so he can look at them better.  I thought this was a great idea.

Daniel will pull chairs to the fish tank to look, tap, then toss anything he has into the opening at the very top of  the tank.  There used to be a flap there, but since it was healthier for the fish to remove it, I can't seem to find it - yay.

I've fished out trucks, cars, drum sticks, and a teething toy.  Each time we tell him that he is hurting the fish, the fish are getting boo-boos.

Does this deter him?  No.

This afternoon it was an airplane.

He took one of his airplanes, and "crashed it" into the tank.

If time-out wasn't deterring this kid, other measures would have to be taken.  I just could not remove the fish tank.  And it was becoming a game for him.  What articles, boxes, books, chairs, buckets etc. could he use as a stool to get up to the tank?

Anything he could find.

It had to end.

And so, I did what every mom in my position would do, I put that airplane in time out.

For the next 2 minutes he was not allowed to play with that airplane.  That yellow airplane made bad choices crashing into the fish tank and giving boo-boos to the poor fishies. 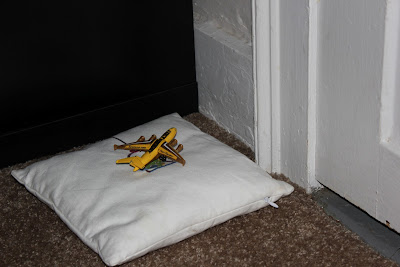 I'll tell you what, though, after a few additional cars went into time out he finally got the picture.  It's only been a few hours, but the fish tank remains as it is; 2 fish, a castle and a climbing rock.
Posted by Full of Fluff at 8:41 PM