My Daughter is 7 months old now.

When I was her age my parents had already taken me to get my ears pierced.   I don't remember it.

Now here's the question.  Do you have a little girl?  Have you, or are you planning on getting her ears pierced?

Don't get me wrong, if you have a son and want to do the same, that is certainly up to you.  This is not supposed to be a sexist thing, though I can't say I recommend it.

My opinion on the matter is, No.  Until she asks me, or expresses interest in getting her ears pierced, she will remain without holes in her ears (not including the holes she already has...I figure she's more apt to put something in those holes before I put holes in her lobes.)

I have many friends who have gone ahead and pierced their girls' ears. That's fine, it's cute, it's just not for me.

Why? You ask. Good question.

I'm not exactly sure why, but I think it has something to do with the choice I make for her.  Perhaps it is a decision that I want her to think about, weigh the options, and make on her own.


Should she want this, we'll do it properly.  Professionally.  Not at a kiosk in the mall.

And so, at 7 months old, it's one less thing I have to worry about for a few years.


Today's Mess of the Day

Today's "Mess of the Day" is brought to you by Streit's Matzo. 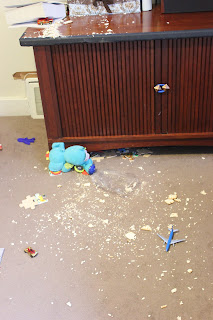 I think from here on out I'll use this format - a post, then, a Mess of the Day.  What do you think?

Email ThisBlogThis!Share to TwitterShare to FacebookShare to Pinterest
Labels: Choices, ear pierce, Mess of the Day