We live in Connecticut.  Though it is a highly populated town, we haven't pushed all the wild life out yet.  There are still yards and mini swaths of woods.  Here on the coast however, the animals have to have state mandated wildlife sanctuaries.

However, that being said, we were neither in one of those sanctuaries nor in the woods.  We were walking down a street behind the cottage we were visiting and came across 2 deer. 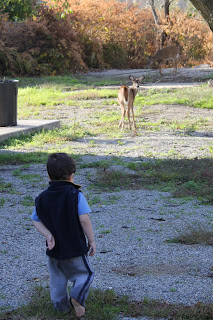 They seems peaceful enough, and didn't get rattled when a few passersby started to snap some pictures - we did, too!

We all expected Daniel to run through the two and scare them away like we would a flock of birds on the beach...but he didn't. 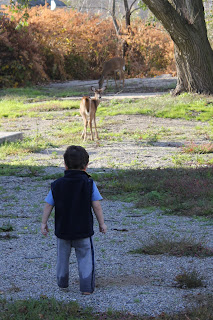 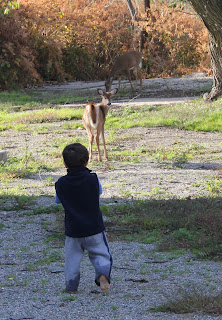 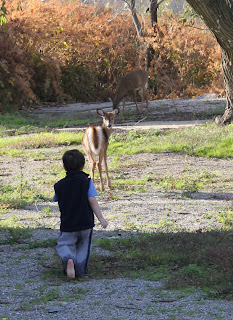 ...getting closer to the smaller of the two - perhaps a baby herself? 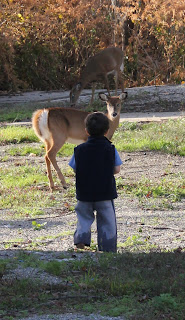 The nearer Daniel got, the more interested the deer became.  You would think it would run away?  I wasn't too worried for Daniel's safety thinking that the deer would run if it got spooked, you know, because that's what they do.  Right? 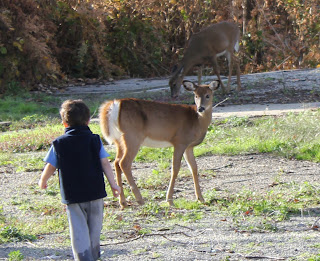 
...suddenly, it was too close and the deer jumped farther away, but then turned back to stare at my son.  Odd.  The leaping fawn must have triggered the bigger of the the two deer to take notice. 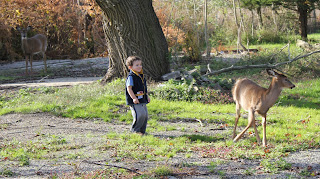 "Hey, what's spooking my baby? I think the deer thought "I should have a look!" 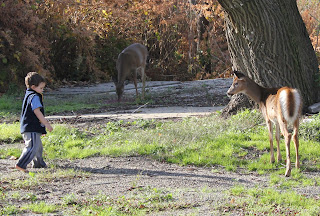 Dear reader, this is where I turned on the video option of my camera.  Thinking that deer are shy, timid creatures, they would soon leap away.  Wouldn't it be cute to capture that look on Daniels face as they ran away from him.

Please watch what happened next.

Note that no one was harmed in the making of this video.  I apologize for the shakiness.  You see, I was running toward the oncoming deer to scare her away from my son.

It was mother against mother.  Protective instincts unfurled, and all we wanted to do was make sure our babies were safe.

We both got what we wanted.

For the remainder of this evening, and I expect every time Daniel sees a deer from here on out, he will retell the story of when he was chased by a deer.

The moral of the story is; don't assume all animals in the wild are afraid of humans, and never underestimate a mothers protective instincts.