An odd solution to diaper rash

I'm just going to "throw it out there," and say that this is going to be a messy post, and I'm going to talk a lot about poop.  If you

It's been a little over a year for our little Miss Amelia to get accustomed to our world.  It's a bright, loud, dirty place replete with foods of all colors, flavors and consistencies.

Perhaps not all of those foods make her developing GI tract the happiest of places.

Sometimes, what goes in one end, comes out the other in a...lovely rainbow of colors and..smells.

We're in a place at the moment where we don't know exactly what is going on with out little lady.  Something is not sitting well, and she has had diaper after diaper of mushy unformed stools.  We've tried switching to lactose free milk - no help.  Not sure what dietary things to change.

Add on top of that, she now goes to daycare.  The daycare provides diapers and wipes and food.  Sounds good, right?  But she uses cheap diapers and, from what I just learned, whatever wipes are on sale.

Not good for sensitive bottoms.  Two weeks ago she got a diaper rash we had trouble getting under control.  We tried slathering with triple paste, chlorine free diapers, and powder - didn't work, she would come home from daycare bright red!

A couple of days of this and I asked the daycare lady what was going on - she said a couple of the other kids also got a rash - perhaps from the wipes, so she went out and got hypo-allergenic wipes. Didn't help - the rash was out of our control. So... off the the pediatrician.

They agreed, something was wrong - but not what we thought.  Poor kid has "chemical burns" from her loose stools. (Odd I know, but it was a diagnosis)

We were given an RX for burn cream (silvadene) and a home made remedy butt cream:

Here's what we did:

Crushed up some Tums: 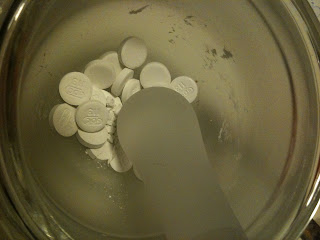 Smooshed them to a silky powder: 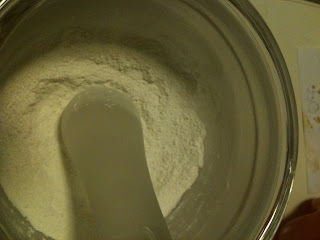 Added antacid (like Maylox, but that doesnt exist anymore) 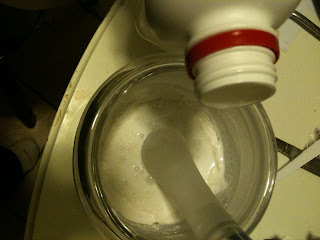 then added Caldecene Baby powder to create the paste: 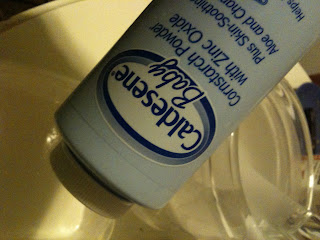 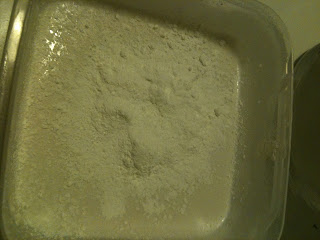 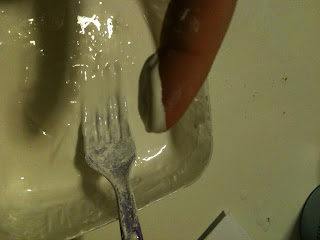 So far her rash is clearing up.

I'll let you know if things get better or worse.