This weekend began my "Year of adventures."

Let me start by saying that I do not know what to expect before the surprise is revealed, and no one who does know, is allowed to tell me that they are even aware of what will occur.

This is what I was told:
-wear a long sleeved shirt
-jeans
-and shoes that went over and protected my ankle.
-bring a water bottle

In the car was a pad and a pen.

Brian asked me to leave work a bit early, since traffic seemed to be heavier than anticipated.  We were both nervous and excited, and bit overwhelmed at the sheer number of cars on the road at 3:30 on a Thursday afternoon.

We made small talk.

I used every technique in my arsenal to get hints as to what I was to expect.

Not knowing what to expect, I even packed my backpack as though it were a 24-hr bugout bag replete with my throwing knives, food, fire-starting gear and some other things.  I was ready for anything.  When  I asked if I will need any of things in my bag, he simply said: "Maybe, but I can't be sure."

And so, with excitement built to an almost frenzy, we pulled up to my first adventure: The first day was book work, so I suppose I didn't need the throwing knives.  At least I had them, right?

This weekend is the riding portion of the class: 2 days, 5 hours each.

This is my on my ride for the weekend: 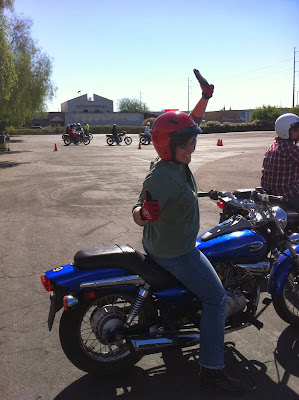 I can wave because I was in neutral.

I couldn't do that yesterday.

I had never been the driver of a motorcycle before, only a passenger.

Riding was intimidating at first, we began by just going through our staring procedures; getting on, starting it, turning it off and getting off.  By the end of the 1st day I was getting up to 3rd gear, weaving, stopping short, going slow in tight areas, taking turns tight, taking a 90 degree slow and tight, and more.

The instructor asked if it was true that I had never ridden a motorcycle.  Aside from racing mountain bikes, I had honestly never ridden before.

He said I took to riding like a duck does to water.

I'm taking that as a complement.

The folks in front of me just could not go fast enough, at least I could practice downshifting more than I had expected.

Tomorrow is my driving test.  If I pass, I get my state motorcycle license!!!

A friend of mine saw what I was doing on Facebook as said that she was selling her 2010 Yamaha V-star 250cc.  How could I refuse????  Now, to pass my test, get some gear, and get through tomorrow.

She said she'd take payments, and hold onto it until I could pay it off.

If you're feeling a bit lush this month and feel like helping with payments, email Brian:  Brian.m.smallwood@gmail.com.  Please put "Year of Adventure" in the topic.

I'll let you know how it goes tomorrow!!!!

Sadly, I tipped the bike over in an attempted figure eight.  Turns out, if you brake in a turn you tip over.

After a rocky start, I kicked ass in the turns, swerves and hazards.  I tore up the higher speed skills, and maneuvered through the curves like a ....like a .....  skilled newbie.

Testing happened throughout the day.  For every infraction of missed action, you get a point.  Getting points is bad.  If you get 20 points - you fail.  Throughout the day I accumulated 4 points.  Three for putting my foot down in the middle of the figure eight turn, and one point for my final "speed and stop."  I got a a point for stopping one foot ahead of where I was supposed to stop.

All said and done, day three, and final score:

I now have 6 months to find a DMV, bring in my certificate, and I get a new licence with a motorcycle endorsement.