Choking is a real and very scary occurrence in most homes with children.  It happens when you least expect it, and faster than you think.

The first and most important thing is to know what to do.  Ideally, before the bundle of stink and joy arrives you've already taken a class - the Red Cross offers a variety of classes including infant and child CPR  (which includes choking victims).

Secondly, remember The Hitchhikers Guide to the Galaxy?  DON'T PANIC!  The last thing you need is to freak out, which wastes precious seconds.  Take a deep breath and do what you have to do, and keep doing what you have to do until either you've fixed the problem, or help has arrived to take over.

I say this like it's just been twice, but no, this is the third official time.  It doesn't get easier.

Time slows, just like in the movies - slow motion.

Did I mention that he can open doors now? 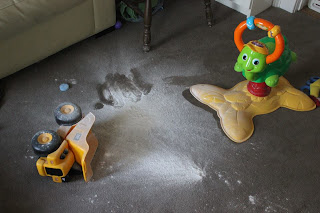 That same bottle which still had a good portion left in it was put at the changing table.

Today he found it.

He found it while I was feeding Amelia.

Just as I said, time stopped for a moment, and I couldn't move fast enough.  He took that open top bottle of baby powder in both hands, made eye contact with me, and, tipped it up as if it were a large cup.

He tipped it up and, as powder tends to do, got stuck at the bottle of a brief second then, the entire contents came crashing down onto his face and into his mouth.

Yes, it was powder.

Yes, he choked on it.

Then, as time crashed back in again, I was up, had him in my arms practically upside down. With  one hand hitting his back the other sweeping powder out of his mouth mixed with the vomit that is associated with choking.  I had him over the sink, my hand filled with water flushing his mouth out the best as I could.

Did I mention he was still sick and his nose was stuffed up?

Finally he coughed out the powder in a surprisingly pleasant smelling puff, and continued coughing and I continued rinsing.

Amelia is now crying in her high chair, I am covered in puke and powder, and Daniel, already dealing with sickness and asthma is just miserable.

10 minutes later, the floor is clean, Amelia is down playing with toys, Daniel is running around in his diaper...and, of all things, eating stickers.

I'll post soon about the later part of that last sentence.

For now, I'll hope the rest of the day goes quickly.  Brian has a late night at the theatre tonight and won't be home until midnight.