Amelia was born when Daniel was only 17 months old.

All he knew was that mommy had a new pillow for him to rest on. 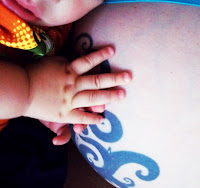 When #2 finally came home, Big D. wasn't exactly sure what to do with her, he was still just a baby himself.  Jealousy didn't play a large role when vying  for attention, we did a remarkable job in that department ( two gold stars for us!)

However, the only thing he did take ownership of was the changing table - she could not be on it without Daniel trying to pull her off - that was a fun phase.

Now that Amelia is 7 months old, things are a bit different.  Thankfully, he doesn't remember a time without her, but he is becoming more and more possessive of toys/laps/chairs etc.  Anyplace we try to put A. down D. wants to be; the excersaucer, mommy's lap, the Bumbo, her crib...even the floor.  He wants to be there, and he doesn't want her there.  Perhaps because he thinks it's his, or rather he wants to show her how to use it/sit in it.

Please don't read this and think, "Oh no, he doesn't like her!" because that is not the case.  He loves her so much.

He loves her so much he must be next to her.

He loves her so much, he snatches her "binky" away so that she will smile at him when he tries to make her laugh, then pile all of her toys onto her...she must be bored. 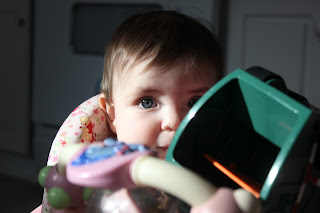 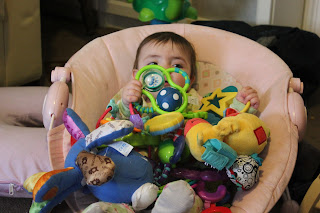 He loves her so much he wants to be in the same jumpy toy that she is in. ( No Pictures of that since , time was important in saving A from being crushed)

He loves her so much he wants to have pillow fights with her like daddy does with him.  She doesn't fight back... 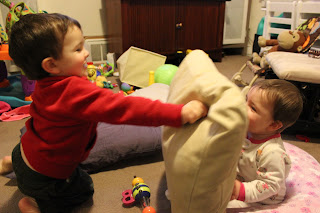 And today, perhaps he wanted to give her a back rub?  Who knows.  But he climbed into the chair with her and tried to push her out. 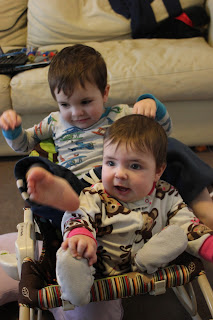 I have enough trouble with two kids.  I have no idea, absolutely no idea how moms survive with more than two this close together.  I love these little balls of energy more than anything, but man, this is by far the hardest job I've ever done.  I challenge anyone who says that being a mother is easy to spend a day in my socks...