"If a man is called to be a streetsweeper, he should sweep the streets even as Michelangelo painted, or Beethoven composed music, or Shakespeare wrote poetry.  He should sweep streets so well that all the hosts of heaven and earth will pause to say, 'here lived a great streetsweeper, who did his job well.'"
- Martin Luther King Jr.

The mere fact that the children are asleep before 8pm should in no way, give you the idea that I have done a good job today.

It started out just fine, you know, like every other day.  We even made fruit smoothies for breakfast!  Big D tried one sip and ..."all done!" he says.  Figures.

At 11:30 I get a call from my husband asking that I pick him up from school, he had hurt his back.  Normally, this man works through everything; pain, blood, weddings, holidays, you name it, he has missed at least one all for the love of theatre and the dedication to his craft.  So, ending a day early was  huge deal.

He could barely move, so we call the Dr. who, suggests he goes to the ER. ( That was 11:45am) It is now 8:30pm, they finally controlled his pain and they are on their way home...drugged up, muscle relaxers, and an rx for classes only if he can manage it.  No heavy lifting, and a mandate to call his back Doc tomorrow for follow up tests.

While he was in the ER I was back at home with the kids wishing I could be there for him.  I tried "quiet time" again today...

As toys crashed, I stood my ground, eventually he would fall asleep, right? 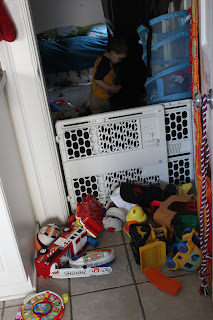 Oh no...he just emptied his toy box outside the room. One by one.  One by one. 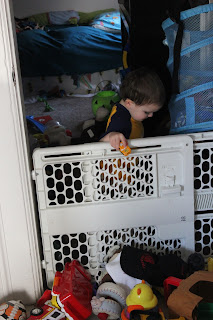 He did not fall asleep.
He did not nap at all today actually.

Also, he barely ate anything.  Connection?  I don't know.

Later on in the day, I smell a very strong spice...almost like Christmas baking, but not as nice...and certainly the wrong time of year...and from this apartment?

"Hi!" he says, throwing down the bottle of CLOVES, and running into his room. 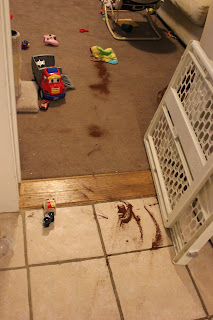 By 6:30 I was exhausted.  We took a little trip to our next door neighbors house to let Big D play with her dog for while - that was great until he just about took her place apart, as well.

At 7:15, bath time completed, diapers changed, dinner done, bottle fed, I decided to drive them both to sleep - I needed a break.

-------
Good friends are hard to come by, easier to loose.  The people you keep closest to you are precious.  More precious than gems, or gold.  Tell them. Appreciate them.  Be there for them, for you will need the same in return when you least expect it.
Posted by Full of Fluff at 7:12 PM