Just before bed time, D. has his finger so far up his nose - up to his 1st knuckle.  Digging...digging...snorting...and digging some more.

"Do you need to blow your nose?" I ask, and bring a tissue for the purpose.  He blows...nothing. Blows again..nothing.

"Did you stick something up your nose?" I ask.  Thinking he would never give me an answer I was looking for.

"Pasta" he said, clear as day. As if it were not big deal, everyone sticks pasta up their nose...right?

It seems the OT had left a few rogue dried elbow macaroni on the floor, and just before bed time, he found one and stuck it up his nose. Then, making it worse, pushed it so far back with that tiny finger of his.  YAY.  So now, sleeping, I did ( of course) an internet search.  All pointing to "Call the Dr."  So I did.

She tells me we have to take him to the ER just in case.  He could choke on it at night, it could fester and become infected or any number of other things.  It cant wait until the morning.

We wake him up, take him, and sure enough they see it, but cant get to it.  Mind you, he is near hysterics, over tired, angry, scared, and uncomfortable.  Long story short they wind up having to thread a catheter up passed the obstruction, inflate it with a cc of saline, and pull the bubble back through with whatever is in his nose.  Which, as he clearly told me, was pasta.  Elbow Macaroni to be precise.

This reminds me of Lyrics from the Fantasticks: 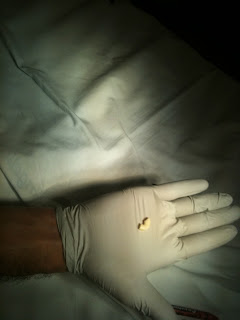