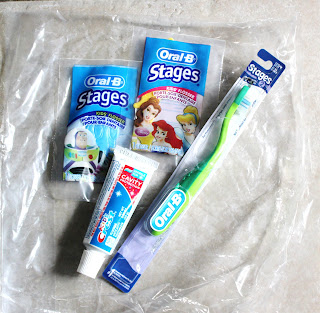 This what you get from the pediatric dentist after your visit.  Once you get to the end...which might take a while.

For Daniel, it was especially traumatic since just recently a man in a coat, in an unknown office, with bright lights,  held him down and did a little more than just looked in his nose and mouth.

The poor kid screamed and clung to me for dear life.  No way was this guy getting anywhere near his mouth.

And so, after he calmed a bit, I held him facing me on my lap and laid him down backwards into the lap of the dentist.  I held his arms against his screaming and flailing as that guy just did his thing; looked, cleaned, brushed and gave him a fluoride treatment.

Good thing he got a great check-up - no cavities!

While there, I asked if he would look at my daughter just to confirm that she was in fact getting teeth, and not just odd white things in her mouth.

The dentist confirmed that my not yet 4 month old had two emerged canines, two more just below the surface, one molar just below the surface, and EVERY TOOTH between them on top ready to come down.  White dots along her entire gum line!!!  This child will not nurse until she is 18 months (like my son) it's time for a bottle of half and half - half formula, half from the tap.
Posted by Full of Fluff at 10:59 AM