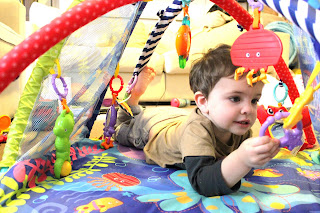 The baby is getting bigger every day. It's time for toys and stimulation that playing peek-a-boo just won't accomplish.

We combined pieces from two different floor play gyms, and it seems that big D. thought it was much more fun than Amelia did.

That's ok, she'll get the hang of it, and perhaps build a few new engrams while at it. True, she isn't learning Mandarin, Spanish, or how to compose, but she's learning something.

That's what "they" tell me.

Also we set up the excersaucer thinking A. had enough head control to sit in it.

She loved it! Sure, she can only be in it a couple of minutes, but as she gets stronger and stronger, she'll enjoy it more and more.

It was put in the corner for later when...

You got it, who just can't keep his hands off it?
He remembered it, and went straight over to his favorite toys from it.

I don't have any issues with him staying on the outside, playing with both it and his sister in it.

But he decided he wanted to get in.

And he is too big. 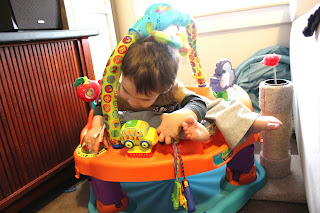 After removing him several more times, I got tired.

So when he got stuck again, I just watched as he tried to get out on his own.

Note: No children were hurt during the making of these pictures. 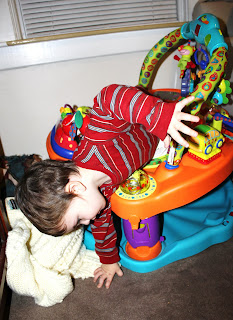 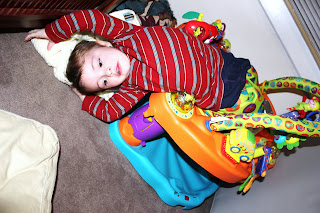 Until tomorrow, when he tries to get into while WHILE Amelia is in it.
Posted by Full of Fluff at 5:05 PM

Email ThisBlogThis!Share to TwitterShare to FacebookShare to Pinterest
Labels: stuck